The men of the 93rd Bomb Group were likely woken early on the morning of October 18th.  They would have been at the mess hall for breakfast, and then reported for the mission briefing.  Here they would have been given takeoff times, assembly points for forming up with other bomber groups, the primary mission objective, expected enemy opposition, and weather reports.

Robert and his crew would have been told that they were to fly a diversion for other bomb groups flying B-17's that would be bombing marshalling yards and a metal works plant in Duren, Germany.  Diversion meant that they were to attract the attention of the German Luftwaffe units in Northern Germany and Holland, forcing the Germans to split their fighter force and hopefully reducing the number of fighters attacking the B-17's on the way to Duren.

Robert and the rest of the 93rd Bomb Group would have no fighter escort at all.  For them, protection came by maintaining a tight formation which maximized the firepower from the numerous .50 caliber machines guns installed on the B-24.  The bomber's were each loaded with six 500 lb general purpose bombs.  Though no target was assigned, each group was given permission to attack any shipping convoy south of 5500 North latitude and east of 0400 East longitude as a primary target.

The continuous foul weather over England and Fortress Europe in the fall of 1943 had been a hindrance to air operations, and it would once again play a role on October 18.  In fact, Duren, Germany had been the target the day before for the 3rd Air Division, but the mission was scrubbed when the bombers were unable to form up due to the weather.  On the 18th, the task of bombing Duren fell to the 1st and 3rd Air Division once again, with Robert's 2nd Air Division flying the diversion.  The B-24's of the 93rd Bomb Group departed from Hardwick at 1041 AM. The 389th Bomb Group was slated to be the lead for the mission, however once the lead ship and the deputy ship of the 389th reported they were turning back shortly after takeoff (likely due to mechanical issues), the 93rd Bomb Group assumed the lead.  In fact, the entire 389th BG was called back and did not continue the mission.  Sometime in the early afternoon, while the group was over the North Sea, it became apparent that the proposed flight path would not be possible due to cloud cover.  The group turned south around 1320 (1:20 PM), and a dozen or more enemy aircraft were seen loitering just out of range of the bombers' guns.  Most of the crews reported that the Luftwaffe was not overly aggressive, and seemed to be waiting to pounce on single bombers that were isolated from the formation.  Contact with the enemy was reported to last about 15 minutes.

According to post-mission interrogations of other bomber crews, Robert's B-24 was seen straggling behind the formation on the flight home.  Single B-24's which lacked the protective fire of the formation were less risky targets for the German fighter aces.  Robert's B-24 was last seen heading into a cloud layer to try and avoid around 4 or 5 Messerschmitt Bf-109 fighters.  No one saw the B-24 after it entered the clouds, however the fighters that were on its tail were seen to emerge from the clouds and head back to base.  None of the crewmen could positively identify the troubled bomber as Shoot Luke, and no communication with the bomber was reported.  The fate of Shoot Luke, Robert, and his 9 other crew members was unknown and the crew was initially listed as MIA, as they did not return to base.  One year after the disappearance of the crew, the War Department notified next of kin that because no trace of the bomber or crew had been found, that the status of each crewmember would now be FOD or finding of death.  To this day, no reports of the crew's or bomber's whereabouts have been recorded.  The last known position of the bomber is in the vicinity of 54.20N 04.50E.

The actual route of the bomber formation was quite different than the planned route (as can be seen in the charts below).  No convoys were spotted, and all but 3 of the 61 bombers dispatched returned to their bases with a full bomb load.  The 328th squadron suffered one additional casualty during the mission.  A tail gunner passed out at altitude due to a failure of his oxygen system, and as a result he suffered from a frost bitten face.  All bombers dispatched, with the exception of Shoot Luke, returned to their respective bases by about 1640 (4:40 PM).

After assembly, the B-17's of the 1st and 3rd Air Divisions were recalled due to the poor weather over the target in Duren, and the mission was attempted yet again on October 20th.

The official mission report can be downloaded in its entirety here.

Flight Path of the Bomb Group

Plotted on the chart below are both the planned and actual route flown by the 93rd Bomb Group. 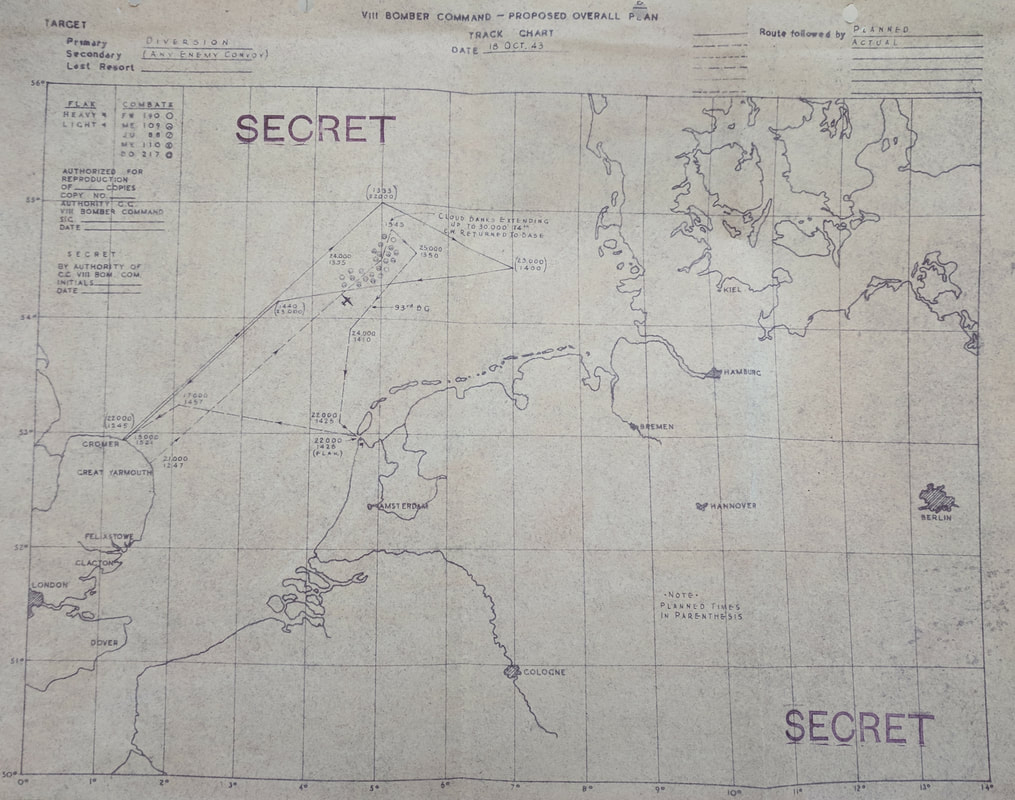 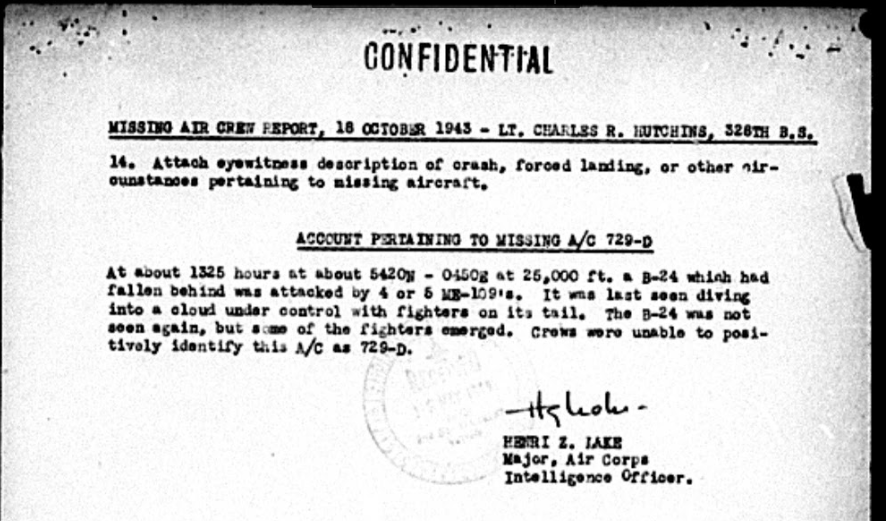 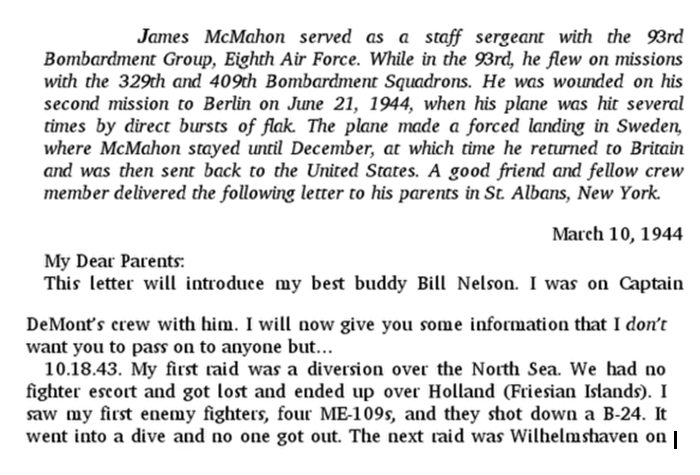 The 93rd Bomb Group would fly again on 20 October 1943 to once again bomb the industrial areas of Duren, Germany.  No losses were reported during this mission.

The MACR in its entirety can be found on the Documents and Media page.

Below is the Interrogation Form that would have been completed if the crew had returned from the mission.  Notice the words "Missing", "Credit Sortie", and "Down" handwritten in pencil.  This is a photo of the actual form which is kept at the National Archives in College Park, MD. 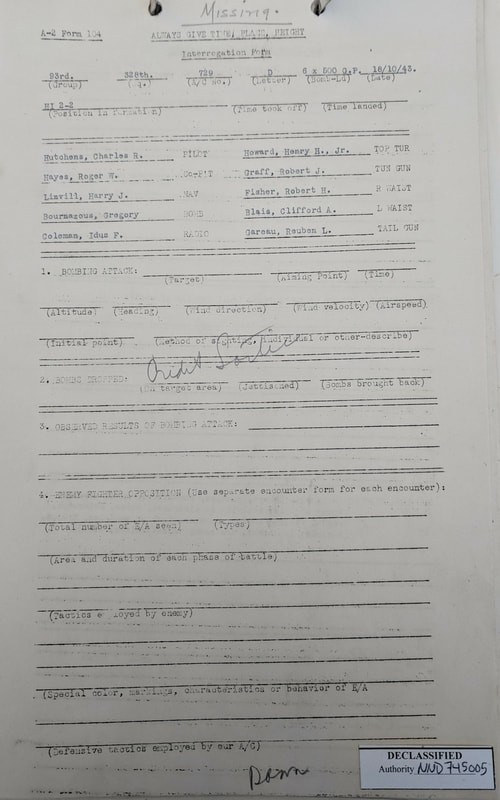 The diagram below displays the position each bomber held in the formation.
​The Hutchens Crew was in the 2nd Flight HI 2-2 position. 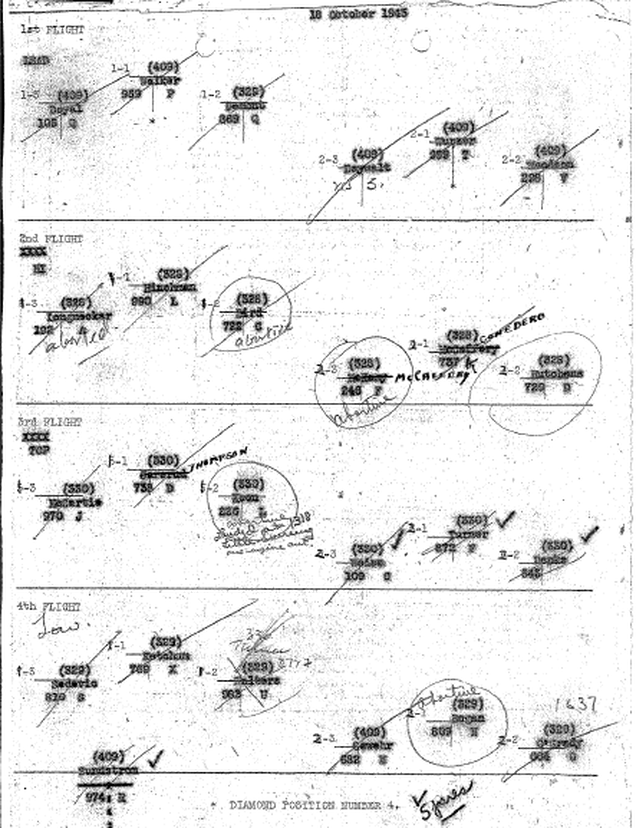 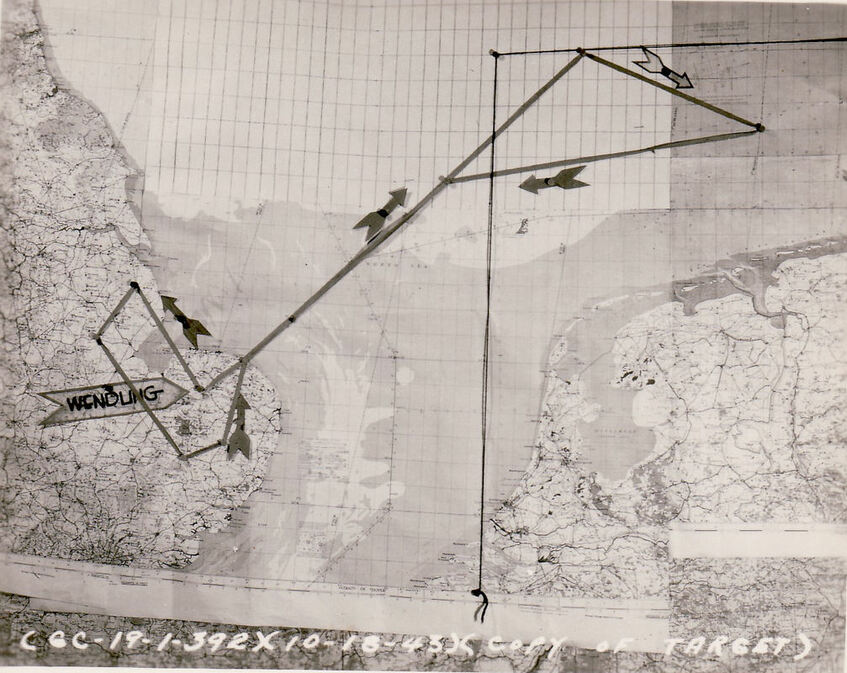 Attacked by the Luftwaffe